Increasing integration between states is crucial for peace and development. However, when free trade agreements like the Transatlantic Trade and Investment Partnership (TTIP) are used to advance at all costs the privileges of dominant world forces, sovereignty remains a necessary tool to manage globalization, protect the public interest and guarantee citizens’ rightful participation in public policymaking. 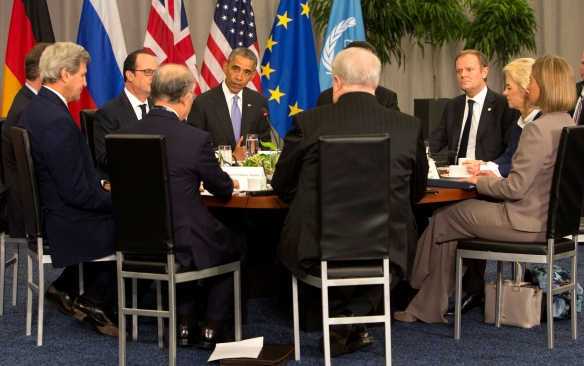 The European Union (EU) and the United States (US) are currently negotiating a free trade agreement (FTA) which aims to ease business activities between each other. The Transatlantic Trade and Investment Partnership (TTIP) is a colossal undertaking that, if ratified, will establish the largest FTA in history (Cardoso et al., 2013: 1). In this article, I will discuss how TTIP carries the potential to limit the capacity of American and European citizens to build their future according to their own values, preferences, and needs. This capacity is protected by the principle of sovereignty, which assigns a state the rightful and legitimate rule over a community residing within a delimited territory (Lake, 2003: 305). State sovereignty is, in this sense, an expression of a community’s desire to govern itself. Since there are several communities, the world is made up of institutional discontinuities: different currencies, legal regimes, and regulatory practices (Rodrik, 2012).

For the proponents of TTIP, these discontinuities add excessive costs to bilateral trade and investment between the EU and the US because multinationals have to adjust to two different legal regimes. For this reason, TTIP is intended to remove these discontinuities in order to strengthen the transatlantic business environment. It is in this sense that TTIP represents a direct challenge to the sovereignty of US and European states. There are two main ways by which the treaty could do so: regulatory convergence and investor-state dispute settlement (ISDS).

Making the way for a “transatlantic regulatory regime”

Instead of focusing only on tariffs and quotas, which are already low (around 4%), the major goal behind TTIP is the harmonization of US and EU regulatory regimes, including intellectual property rights (IPR), technical barriers to trade (TBT), food safety, and the regulation of financial flows and environmental standards. In this sense, TTIP represents a direct challenge to the sovereignty of the US and of European countries, because it seeks to influence the ways these states regulate and structure their economies domestically. However, the idea of creating a unified transatlantic regulatory system is problematic because there are several instances in which the two sides have very different views, which result from their own cultural and social contexts. The most controversial area is food safety. Here, the EU, differently from the US, applies the “precautionary principle”, which assumes that if an action or policy has a suspected risk of causing harm to the public and there is not scientific consensus about the matter, the burden of proving that it is not harmful at all falls on those taking an action (Science & Environmental Health Network, 1998). Under this principle, the EU has banned the commercialization of genetically modified (GM) food, indicating that the prospect of lower prices alone is not worth the risk. In practical terms, this means that US agribusiness is not allowed to export GM food to the EU. This is a point of strong discord between the two parties, with the US business sector insisting that the removal of the “precautionary principle” is needed in order to achieve a comprehensive trade and investment agreement between the US and the EU (Corporate Europe Observatory, 2013).

Given their substantially different risk preferences, it is unlikely that the EU and the US will reach a compromise on food safety during TTIP negotiations. However, according to a leaked EU position paper, this will not constitute a problem because, after the ratification of the treaty, the work towards “regulatory compatibility” on this and/or others areas is set to continue under the auspices of the “Regulatory Cooperation Council” (European Commission, 2013). By taking place in this council, the decision-making process in terms of regulations moves steadily farther away from its local context and into a supranational one, posing – once more – a long-lasting challenge to sovereignty. What is problematic about this fact is that regulations will become less and less based upon national preferences and will start to be built around “transatlantic values”. Since this is an abstract idea, there is much room for powerful non-state actors, like multinational corporations, to fill it with meanings that match their own agendas. In fact, as highlighted by Corporate Europe Observatory (2013), besides being a mere copy of previous proposals made by European and American multinationals, the EU position paper stresses the need to consider and analyze, while negotiating regulatory compatibility within the Regulatory Cooperation Council, the “substantive joint submissions from EU and US stakeholders” (European Commission, 2013). This is a strong indication that business representatives will be enabled with more conditions that allow them to “capture regulatory decision-making more effectively and discreetly in the future”, even more so than in the spotlight of TTIP negotiations (Corporate Europe Observatory, 2013). If we consider that “93% of the Commission’s meetings with stakeholders during the preparations of the [TTIP] negotiations were with big business” (Corporate Europe Observatory, 2013), it is possible to conclude that the danger of policy capture is very high.

ISDS as a tool for multinationals to influence public policies

Besides regulatory convergence, TTIP is likely to pose a challenge to US and European states’ sovereignty through the implementation of an international investment arbitration system, also known as investor-state dispute settlement (ISDS). This system adds a new legal layer, providing US and EU investors with the opportunity to bring public authorities on both sides of the Atlantic before ad-hoc arbitral courts, which are established under the aegis of arbitration centers such as the International Center for the Settlement of Investment Disputes (ICSID). Driving the creation of transatlantic ISDS is the idea that since it offers more guarantees to companies and equity funds, their investments will be more protected against state action.

The establishment of an ISDS system across both sides of the Atlantic challenges states’ sovereignty in two ways. First, it bypasses local judicial systems (either national or regional), reducing their relevance in solving legal disputes. Second, it gives multinational corporations an immense influence in public policymaking by allowing them to sue public authorities whenever they consider that new policies in the area of public health, environmental or social protection could affect current or future profits (Bizzarri, 2013: 24). Examples of this are, among many others: the legal action taken by US tobacco company Philip Morris against Canada and Uruguay for the adoption of anti-smoking laws, and the ICSID proceedings initiated by the Swedish energy company Vatenfall in 2009 to challenge Germany’s new environmental law.

In certain cases, even the threat of a lawsuit is enough for multinationals to block legitimate public policies. This regulatory chill means that the costs and length of lawsuits may deter states from taking regulatory measures that have a potential impact on foreign investment. According to Olivet and Eberhard (2014: 39), the US-based law firm K&L Gates recommended, in a 2011 client briefing paper, that investors should use the threat of investment arbitration as a “bargaining tool” in negotiations with governments.

Recently, in order to address mounting criticism, the EU put forward the proposal of replacing the ISDS mechanism with an Investment Court System (ICS) (European Commission, 2015). However, as pointed out by the German Association of Judges, this new institution does not confront the core problem of TTIP’s investment scheme, that is, the fact that foreign investors have unjustifiable privileges to sue states to the expense of citizens (IISD, 2016). In this sense, the ICS brings very limited change, being merely a re-branding strategy carried out by the European Commission.

To conclude, regulatory convergence as well as the establishment of a transatlantic ISDS mechanism or court within TTIP are guided by an agenda of state disempowerment in favor of transnational institutions and capital. The goal is to strengthen trade and investment. However, in both situations, sovereignty is compromised and the scope for US and European states to cope creatively and distinctly with the effects of globalization and govern according to the needs, wishes, and expectations of their citizens is severely narrowed. Increasing integration between states is crucial for peace and development, but when free trade agreements are used to advance at all costs the interests of dominant world forces, sovereignty remains a necessary tool to manage globalization, protect the public interest and guarantee citizens’ rightful participation in public policymaking.