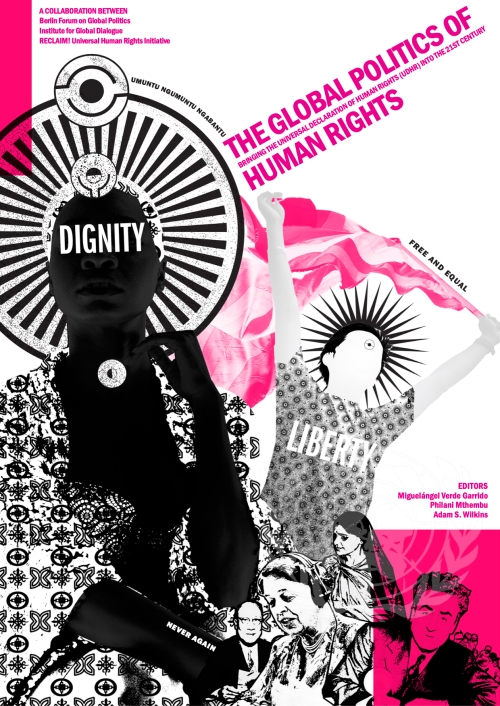 More than 70 years after its adoption, the Universal Declaration of Human Rights (UDHR) continues to provide the foundation for national and international laws concerned with human dignity and the universal and inalienable freedoms and claims of every person. However, surveying global politics today, it is clear that neither the UDHR nor subsequent legislations on human rights are strictly observed or adhered to across the world. Indeed, the UDHR has received much criticism over the decades, and violations of human rights are ubiquitous throughout the globe nowadays.

However, these critiques do not contest the core principles enshrined in the UDHR nor its potential to better the human condition and societies worldwide. In this sense, because it is crucial to understand the UDHR as a living document, relevant as ever, which can be broadened and made fully applicable to contemporary realities rather than a failed project, the Berlin Forum on Global Politics, in collaboration with the Institute for Global Dialogue and RECLAIM! Universal Human Rights Initiative, distributed an international call for papers in order to collect a wide spread of articles to expand awareness about the trials and prospects of the UDHR in general and understanding about contemporary human rights issues in particular.

The result is an open knowledge publication, freely accessible under a Creative Commons license, which includes 24 articles written by numerous well-informed stakeholders from across the globe, who include human rights scholars and practitioners, experts and activists, researchers and members of civil society and non-governmental organizations.

The articles address particular aspects of the history of the UDHR, the expansion and implementation of its Articles, its role in the prevention of violence, and its potential to address a changing world. As a whole, the publication serves two goals. On the one hand, it clarifies why the UDHR continues to be strongly relevant to the contemporary values, dynamics, and conditions of human rights in the 21st century. On the other hand, it illustrates how the UDHR and its Articles can be further adapted and implemented to uphold and safeguard human rights even in times when global politics often follow the siren songs of populism, authoritarianism, nativism, and extremism.

We are hopeful that this publication will improve discussion as well as inspire action among those who are interested in the future of human rights and the social, cultural, economic, and political dimensions and implications of human dignity.

Please feel free to share this publication with other individuals, groups, and institutions within your network who have an interest in the future of human rights, democracy, and civil liberties. Also, we are thankful for any feedback you wish to share with us, since our hopes are to expand the diversity of interlocutors and audiences in the ongoing discussion on how to further ensure the dignity of all persons worldwide, and inspire them to realize the importance of their participation in the collective endeavor that is bringing the UDHR into the 21st century.

Download your digital copy of ‘The Global Politics of Human Rights: Bringing the Universal Declaration of Human Rights (UDHR) into the 21st Century’ in .pdf file format.